RSS
← Yes God is Still God in the Bad Times
In That Day! →

We Must Take Care Not to Mislead 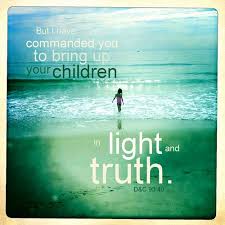 If there is one thing that really makes me indignant it is when adults feel the need to share what “they” believe instead of what God’s Word says when a child asks a valid question. They need the truth, especially as they get older. I was instructed many years ago as a Sunday School teacher of what God’s Word tells us about taking care not to mislead these young ones in Matthew 18:6 “But whoso shall offend one of these little ones which believe in me, it were better for him that a millstone were hanged about his neck, and that he were drowned in the depth of the sea.” Yes, I take very seriously how I answer children’s questions. If I am not sure of an answer, I let them know I’m not sure, and I sit down with them and with God’s Word as we pray and seek His direction. I want them to know how to find answers for themselves.

Not long ago a youth very close to me asked me the question, “When our pets die, do they go to Heaven?” Now, no matter how much I wanted to tell him yes because that’s what we all want to believe, I felt that he trusted me to give him the truth. So I showed him what the Bible says about the spirits of humans and animals at the time of death: Death is the departure of the spirit from the body in humans and animals. Ecclesiastes 3:21 tells us “Who knoweth the spirit of man that goeth upward, and the spirit of the beast that goeth downward to the earth?” I used to think that my beloved pets went to Heaven when they died; as children need to believe, I guess. I even read as far as I could in a book a Christian wrote once on the subject. It did not take me long to see that the author had taken a lot of verses out of context to try and prove his point.

That author also neglected the truth that animals do not have souls. Death is also the departure of the soul from a human. There are two invisible beings inside of us: a spirit and a soul. When Jesus died on the Cross, His spirit went to Heaven (Luke 23:46), and His soul went into hell, or the heart of the earth, “Because thou wilt not leave my soul in hell, neither wilt thou suffer thine Holy One to see corruption. He seeing this before spake of the resurrection of Christ, that his soul was not left in hell, neither his flesh did see corruption.” (Acts 2:27, 31) Jesus went to get the Saints who had passed before Him, from Abraham’s bosom. The spirit and soul are distinctly different and both leave the body at death: 1 Kings 17:21-22, ” And he stretched himself upon the child three times, and cried unto the LORD, and said, O LORD my God, I pray thee, let this child’s soul come into him again. And the LORD heard the voice of Elijah; and the soul of the child came into him again, and he revived.” Animals do not have souls, only humans do. Animals have spirits. Animals also do not have the reasoning power in their brains to know about being a sinner and needing and accepting The Saviour is the only way to Heaven as humans do. Although there will be animals in Heaven, they will not be our dearly departed pets.

Later, this young man came back to me after visiting another adult in his life who said she did not agree with what I had told him. I asked him if she showed him in God’s Word where it says animals go to Heaven, or why she believes they do? He said, “No, she just said she did not agree with you.” I sensed his hurt and disappointment because she is someone he looks up to also, and I felt angry that this person, because of her ill feelings and envies toward me, would so nonchalantly let those feelings come across to an innocent child. Children are so very perceptive of these things, and it can be quite damaging to them. It’s just like when a couple gets divorced and the judge tells them not to demean each other in front of the children. What typically ends up happening is the children will grow to dislike or even hate the person who does this.

Since I would never speak ill of this person to this child, I prayed in my spirit for the Lord to help me lovingly reiterate what and why I had told him my answer to his question in the first place. I asked him if he wanted to pray with me that the Lord will show her the truth, because he was so concerned. We talked about how we can all have pre-conceived ideas about things and not know that we are wrong according to God’s Word, until someone shows us the truth. We also talked about how it is okay for people to disagree, but not to try and force our beliefs. I do not believe that this subject is a huge deal that needs debating or arguing about. Being wrong about this will not keep someone from going to Heaven. At God’s direction, we are to share God’s truth and leave it in His hands. I am still praying that the Lord will speak to that person and convict her of how she influences these young ones.

← Yes God is Still God in the Bad Times
In That Day! →