Rahab – A Woman of Great Discernment 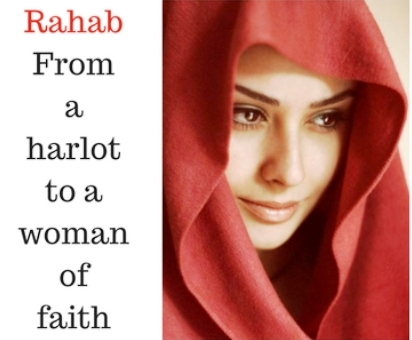 I love reading the old stories of how God used so many vessels we would look at as unworthy to accomplish His will. And I love the stories of the women in Jesus’ lineage. Rahab was one of those women! She was clearly an intelligent woman who showed a remarkable knowledge of the recent history of Israel, and of what God was doing for the Israelites when they drew near to her country. In fact, she seemed more aware of God’s intervention for Israel than Israel was. Compare – Joshua 2:9-11 “And she said unto the men, I know that the LORD hath given you the land, and that your terror is fallen upon us, and that all the inhabitants of the land faint because of you. For we have heard how the LORD dried up the water of the Red sea for you, when ye came out of Egypt; and what ye did unto the two kings of the Amorites, that were on the other side Jordan, Sihon and Og, whom ye utterly destroyed. And as soon as we had heard these things, our hearts did melt, neither did there remain any more courage in any man, because of you: for the LORD your God, he is God in heaven above, and in earth beneath.” to Joshua 1:2, 11, 13 “Moses my servant is dead; now therefore arise, go over this Jordan, thou, and all this people, unto the land which I do give to them, even to the children of Israel…Pass through the host, and command the people, saying, Prepare you victuals; for within three days ye shall pass over this Jordan, to go in to possess the land, which the LORD your God giveth you to possess it…Remember the word which Moses the servant of the LORD commanded you, saying, The LORD your God hath given you rest, and hath given you this land.” She also had wisdom enough to obtain an agreement for protection from the spies, hid them, and out-smarted her own people when they came looking for them.

It took a lot of guts for Rahab to help the spies and arrange the deliverance of her entire family. Her siding with the Israelites was treason, punishable by death, not only for herself, but also for her whole family. Once she made her decision, there was no turning back.

Finally, Rahab was a woman who showed great spiritual insight. She recognized the difference between Israel’s God and the gods she and her people served. God was supreme–He did not share His rule in the heavens and the earth the way their gods did – Joshua 2:11 “And as soon as we had heard these things, our hearts did melt, neither did there remain any more courage in any man, because of you: for the LORD your God, he is God in heaven above, and in earth beneath.”

We can see Rahab’s first confession of faith in her use of Yahweh’s name. Without any support or input from her world or Israel’s, she claimed the covenant name God gave to Moses when the Israelites first left Egypt – Exodus 3:14 “And God said unto Moses, I AM THAT I AM: and he said, Thus shalt thou say unto the children of Israel, I AM hath sent me unto you.” Then again, without any encouragement from others, she acted on her commitment by hiding the spies. This kind of faith was not often seen in God’s own people in the Old Testament, let alone from a Gentile harlot! It makes me think that Rahab had come to know the God of the Israelites and had a relationship with Him, even if it began out of fear for herself and her family. This is another great testimony to how valuable EACH and EVERY soul on earth is to our Lord God Jehovah! He would that NONE should perish!

This woman is a wonderful role model for making the right decisions and standing firm, even when it means going against our own peers. No wonder God wanted to honor her faith and courage by placing her in the line of our Messiah. Boaz, one of the most gentle and Godly men in the Old Testament, was her offspring. We are reminded of this in Matthew 1:5 “And Salmon begat Booz of Rachab; and Booz begat Obed of Ruth; and Obed begat Jesse;” As well as in the Book of Ruth. God honored Rahab’s faith and courage by placing her in the lineage, not only of Israel’s great King David – Matthew 1:6 “And Jesse begat David the king; and David the king begat Solomon of her that had been the wife of Urias;” But ALSO of Jesus, the King of Kings – Matthew 1:1 “The book of the generation of Jesus Christ, the son of David, the son of Abraham.”